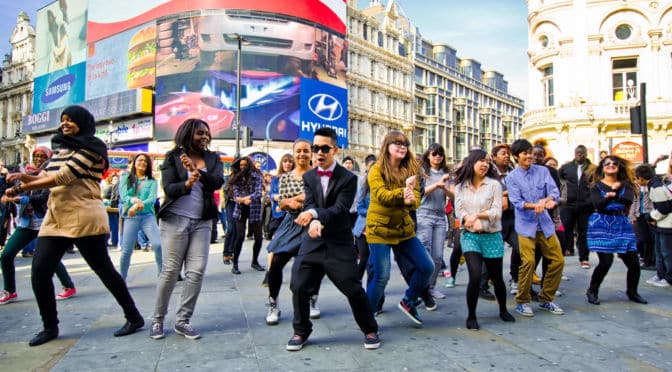 Oppa Gangnam Style! Remember this line? PSY’s Gangnam Style was the first video to ever hit 1 billion views on YouTube, making it the most viewed video back in 2012.Gangnam Style was something that everybody talked about, including me. I thought it was a fun, peppy song about Korea but turns out that deeper digging pegs it as a satirical song poking fun at upper class district of Gangnam in South Korea (the more you know).Ah, such fond memories of the song! I remember dancing along to it (if you can find the video, pretend you don’t know me) for a school project in front of a hundred excited students.I was in the back though, because I sucked at the horse-clopping dance move that was apparently mimicked by many notable world leaders.As I write this article, the same song plays in the background, part in nostalgia, part in reference for the article, and partially because it reminds me of how powerful the web can be to spread not just messages, but also how it can become a vehicle to move people (quite literally, in this sense!).

Gangnam Style had become a “viral” sensation; a term coined in 2004, though the meaning ‘involving the rapid spread of information’ has been around since 1989.

PSY’s video reigned as the most viewed video of the ages until in 2017, Wiz Khalifa’s rendition of See You Again topped at 2.9 billion views. I don’t remember much about this song, except that my friends were raving about it. I took a listen and was like, “that’s nice,” and left it at that.

Or so I thought.

I couldn’t quite escape See You Again, as every person I knew sang it and every radio station I listened to played it over and over and over again. It became something of an ear worm, annoying at first. I listened to it so often that it was until such time I caved in and bought the song over iTunes, pressing the repeat button, well, repeatedly.

I told myself, “This is the last time a hit like this has made me so crazy.” That notion held out for about a month.

Then fast forward to the present month, August, when Despacito becomes the most viewed video of all time; it climbed the charts faster than you can say “hasta la vista”, overtaking See You Again in record time. Frankly, because I’ve been living under a rock, I thought that Bieber sang the song because all the stations were mostly playing his rendition.

The first time I heard it was in my friend’s car and I thought, “eh, not bad” and now I’m listening to it again and again as I write this article. I was born before the turn of the millennium (90’s kid yo) and Latin American hits like the Macarena and The Ketchup Song were staples in my years growing up so perhaps it is the nostalgia that keeps me coming back for this song.

All this being said, there is no denying the power of the internet and in this case, YouTube, for pushing global entertainment into the to greater heights!

Chad Hurley, Steve Chen, and Jawed Karim founded YouTube in 2005. Now it is the largest video-steaming site on the planet, with an average of 1.5 billion users logged in daily (about ¼ of the world’s population). Bought by Google in 2006 for $1.65 billion in stock, we can only hope to see even more hits and yet more commercialisation.

It’s really no surprise that many breakout acts started on YouTube, posting covers of songs and dance, which then resulted in labels picking up these yet unknowns and turning them into superstars.

Many Latin American hits took the world by storm, not just Despacito. Remember the singer of Hips Don’t Lie? Shakira’s sonic influences are both eclectic and global:

“For if this album is anything, it’s a global pop/rock album with each of those modifiers carrying equal weight: these are pop songs performed as arena rock, belonging not to a single country but to the world as a whole. “

Also, perhaps why the global influence of K-pop reaches far and wide (but perhaps not as much as Latin American music):

“Part of K-Pop’s success in Japan can be attributed to globe-hopping musical production. Ian Martin of The Japan Times writes that Korean acts take most of their cues from Western music.”

These combined sonic influences and the power of YouTube help not only people like me get great entertainment (and a way to kill time) but also shows that music unites people in more ways than one. It is the global influence and power of YouTube that has its people in its thrall as they watch video after video, perusing deeper and deeper. Heck, music aside, I’m guilty of the classic cat video binge watching.

Honest opinion: I still like Gangnam Style the most out of these three, despite being more into Western music and J-Pop.

That being said, there’s no telling where this will go next. Who will top Despacito? When would that happen? Will it even happen?

Hopefully there will be a “to be continued.”